I haven’t blogged since a year ago (ha! I still got jokes). I’ve missed this: Sitting on my bed, listening to Beyonce (yes, I am still obsessed. A new year doesn’t change that), sipping a cup of Organic The Skinny by my loves at David’s Tea (note: Though this tea is said to contain a weight loss remedy, I actually just love oolong and ginger tea and my throat is currently achy so the ginger is helping on that front) and typing away my thoughts, my feelings, my aspirations and describing to all of you my one true girl crush.

I promised myself that I would blog more during the holidays, but with working, family get-togethers, my partner being home from Vancouver and a lack of sleep (the only sleep coming from me passing out in front of movies), my creative juices were at a standstill. I couldn’t think of what to blog about. I thought about blogging (it makes me oh-so-happy), but then the writer’s block would kick in and I’d look like this while thinking of what I wanted to write:

So I took a break. A hiatus of sorts. But, now I’m back and ready to start writing again. And on this lovely Saturday morning, I bring to you my thoughts on new year’s resolutions.

New year’s resolutions can be meaningless attempts to change who we are based on what and who society tells us we should be. Headlines like, “New year, new you. Join such and such a fitness centre and finally get the abs you want,” and “Must-have hair accessories for the you of 2014,” don’t do much for a person’s self-esteem. Trust me, there’s a flyer from the Women’s Fitness Clubs of Canada sitting on my kitchen counter with similar advertising. They even have a special price for January 2014: Only $20.14 a month! Sounds amazing, except for the fact that joining could mean I have to sign a one-year contract and only spend 10 per cent of my time at the gym that I had originally “resolved.” Then, not only am I out $20.14 a month, but I’m also feeling like failure for not keeping up with my promise and for being a lazy bum. 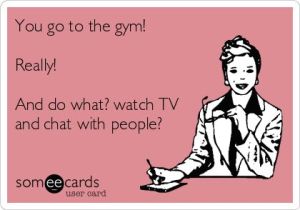 Superficial resolutions are often unattainable throughout the rest of the year, so why on January 1 do they automatically move into the number one spots on our to-do lists? If you want to join a gym, join a gym. Don’t be a part of the “New Year’s Reso Crowd.” Do something truly for yourself and not just because everyone else seems to be doing it, too.

Speaking of to-do lists, why not make list of resolutions, not just because it’s a new year? Real-talk right now, you can make a change to how you live your life on any day and at any moment. December 31 at 11:12pm works just fine, too, it’s just not as trendy and commodifiable as the morning of January 1. Would Apple, let’s say, pay for an advertisement in a major newspaper in your community in March explaining this “new you” that’s just an Apple-store visit away? Probably not.

However, Apple did make a holiday commercial that pulls all the right strings, makes viewers cry (it made me cry, that’s for sure) and sort of makes a new year with a new iPhone sound pretty darn appealing.

If you’re going to make new year’s resolutions, why not make them actually attainable? Just like we’re taught in school as kids – set goals for ourselves we can achieve, like making a whole two minutes of eye contact during a three minute speech in front of your grade four classmates, as opposed to making goals that may be too vague or complex. Just because we’ve grown up and are flaunted with photos of Kim Kardashian’s rompa on Instagram doesn’t mean we have to have a Kardashian bootay (I wonder, will #bumselfie be a trending topic in a few weeks?). Maybe you want to organize your finances more or do yoga once a week. Maybe you want to go to see a band you’ve never seen perform live before. Maybe you want to have dessert once a week. Maybe you want to actually finish the book that’s been sitting on your bedside table for months. You can do all of those things without a magazine or a newspaper or a radio show telling you to start them on January 1.

Remember, on January 15, you’ll start seeing and hearing a lot about failed resolutions, just in time for February. Does this mean you should stop making goals just because you’re consuming a lot of smack about other people falling through?

So why listen to media that tells us to start being new versions of ourselves a month before?