Yesterday morning went a little bit like this: I woke up dreading going to my dentist appointment. I checked Instagram and saw a photo of Beyoncé with Drake’s face, somewhat transparent in the background, and immediately was so confused. “How am I the worst fan? I didn’t know Beyoncé and Drake were going to collaborate. What?” And then, then I saw more. Beyoncé had released a new album. “I seriously suck,” I thought. “How did I not know?” So naturally, I logged into iTunes and hoped I still had enough on my gift card to by the visual masterpiece.

And then it was mine.

As everyone and their dog know, Beyoncé released her self-titled, fifth studio album on December 13 without even a drop of promotion. She dropped 14  beautiful songs and 17 spectacular music videos in this first ever visual album as if it were as simple as waking up in the morning.

I was glued to my laptop all day yesterday and only took breaks to shower and eat (even then, I had trouble pulling away), as I was consumed by Beyoncé’s newest artwork. Clearly, this lady is freakin’ superwoman.

If I could pull Beyoncé away for 2.5-minutes, I’d probably cry and scream and fangirl and hug her and touch her weave and stare at her beautiful eyebrows. But then, if I could manage, I’d let out the six questions below (possibly between tears and heart palpitations):

1. How did you have time to world tour, be a mom and make a visual album with over 30 tracks? Some of them videos? No seriously. Sometimes I don’t even have time to pee. I know you have probably a thousand minions running around doing stuff for you, but can you explain how you function to get things done so efficiently? Girl, you’ve got time management skills from God. I guess you’ve also got money. So, there is always that differentiating factor between my life and yours.

2. How old is Blue? And, how is her “Hold on to me” sentiment so clearly pronounced? So I guess she’s also a megastar like yourself, then?

3. Who are you Jealous of? I hope nothing is wrong with you and Jay Z. I once heard a rumour that Jay Z had several mistresses, one living in Toronto, who he spends his nights with in Yorkville. I hope that’s a lie. Your relationship is perfect. Right? Don’t break me. 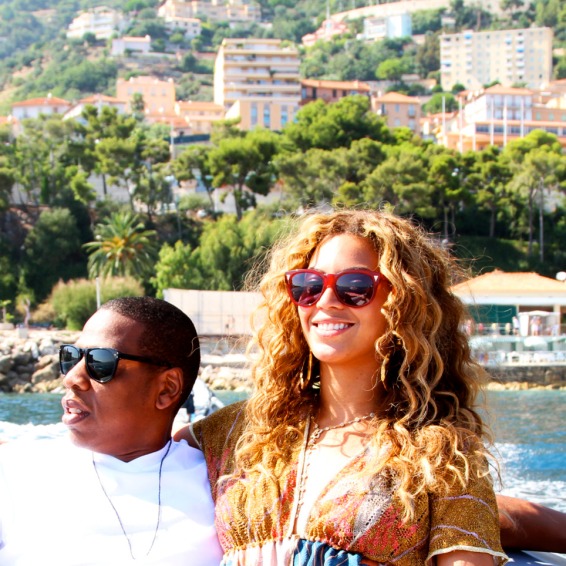 4. One time my friend told me, “I respect you like Beyoncé.” It was a pretty awesome moment. Clearly literally everyone, even your minions and anyone who comes in contact with Sasha Fierce, have a lot of respect for you, to the point where they won’t even let it slip that you’re releasing an album. Where do you find such trustworthy people? Or does it have something to do with the fact that you’re a queen, a diva and probably extremely intimidating when you want to be?

5. The way you and Jay Z are dancing in the Drunk In Love video is pretty nerdy. How come you make it look so cool? If I were to dance like that, everyone would laugh hysterically. With that being said, I would probably do it anyways and scream, “I’m Beyoncé,” with the biggest smile, then drop it low. Do you offer dance classes? No, seriously. Can you randomly come to my gym and stop a Zumba class or something, just to teach the class and I how to dance like you? I’m serious Bey. Please? Merry Christmas to me…

6. You do realize that whenever the world and I are in a slump, all we have to do is turn on your music to feel like gods and goddesses? To feel like we Run The World? To feel like top sh**? You do realize that when I went to your “The Ms. Carter Show World Tour” in Toronto earlier this year, everyone, no matter how big, how small, how fashionable, how trendy, how tanned, how pale, etc. was rocking their style and walking around like they were on top of the world? Including myself? I think we owe you a thank you. A big fat thank you!

I probably wouldn’t have time to ask her these questions though. Her bodyguards would probably push me away and then I’d be left with: I stood in front of Beyoncé.

Is it sad that I might be okay with that? Oh, just to be near this woman would be an intoxicating experience. And I mean actually near, not like in the 300s at the back of the Air Canada Centre.

A girl can dream.

Do you fangirl over anyone?