I was walking in the Village of Parkdale, on the hunt for second-hand clothing that wasn’t from Forever XI and didn’t look overly worn, when I walked by The Everyday, a collective pop-up shop with rotating vendors in Toronto’s west-end by Vacantful, a company which converts empty spaces to happening places with the goal of helping brands, artists and communities grow.

When I entered, a young lady of medium height and short blond hair greeted me. Her eyes were kind, her style simple and her voice, saying, “Everything on this rack is eight dollars,” was soft and knowing that those words were exactly the ones I wanted to hear.

With my first step into the store, I didn’t know that this young woman was called Stephanie Traplin. Nor did I know she was a vendor in The Everyday that week who had just graduated from the Integrated Media program at the Ontario College of Art and Design (OCAD). I didn’t know Traplin was the “Owner Extraordinaire” of company Take Time Vintage, a brand all about how fashion dominates our lives, how she likes to take time to think about what she’s wearing and about appreciating the process of exchanging money for style – even if iconic pieces that complete our styles were worn by others in different ways.

It was when I tried on a slew of items – all off the eight dollar rack, no doubt – and I approached the young woman who greeted me at the door did I learn it was Traplin – a 24-year-old entrepreneur who fell in love with making second-hand clothing new again (and not at all similar to the chains of “vintage” stores popping up on every street corner in Toronto).

About to purchase a calf-length jean skirt and noticing a button popped off the top, I awkwardly asked Stephanie if she could kindly sew the button back on (I shamefully don’t own a needle and thread or know how to use one). She helped me without blinking. I completed my purchase and she gave me her business card – an appropriate, custom-made card to look like a clothing tag – the same clothing tag on the items I was taking home with me.

A little green light when off inside the blogger’s head of mine and I knew I had to get in touch with Traplin again. I needed to hear her story.

Traplin and I met for tea at a café near Queen and Bathurst Sts a few days after my visit to Vacantful’s The Everyday. I clumsily walked in with bags of groceries to find us a table, where we would talk for nearly an hour over jade citrus tea.

Here’s what I learned:

After graduating from OCAD, Traplin entered a two-year fashion business program at a college in Toronto. A year into the program, she realized she didn’t need to be there.

“I loved the school, but I was at the stage where I needed to learn by doing,” Traplin said.

So that’s what she did. Traplin held her first pop-up shop in the back of Wyndham Variety, a convenience store in Guelph with a gallery and art-space in the back. A few of Traplin’s friends in the Guelph community were selling their artwork during the pop-up and she was selling her clothes.

Now about six months into business, Traplin has started to see returning faces, and not just the familiar faces of friends who helped her in Guelph.

“Followers on social media are very important,” Traplin said. “That’s where people get to see what’s happening. I get to see returning faces and meet my followers. That’s how I define success of my business. Of course, success also means meeting new faces.”

With the pop-up shop at The Everyday being the fourth event for Traplin, who also has an Etsy store, the most challenging part of being in the fashion industry and the mastermind behind every aspect of her brand is that sometimes, the things she tries don’t work.

“Sometimes, I won’t break even and it’s really hard to stay positive, but then, the following week, you do something and are 10 times more successful. The struggle you face ends up being worth it. You may not make every sale, but you make a new one-time or long-term customer,” Traplin said.

When looking for new merchandise, Traplin said she frequents secret warehouses in the Greater Toronto Area to pick.

“Toronto is huge for used clothing. I think it’s safe to say Toronto has the most used clothing warehouses in North America,” Traplin said.

“I pick through things to find stuff. I see potential and pieces and I change them, whether by hemming them or altering them in another way,” she also said, adding that since vintage clothing shopping is on the rise in Toronto, finding unique items that actually sell can be quite hard. “It’s slim pickings! Everyone wants vintage.” 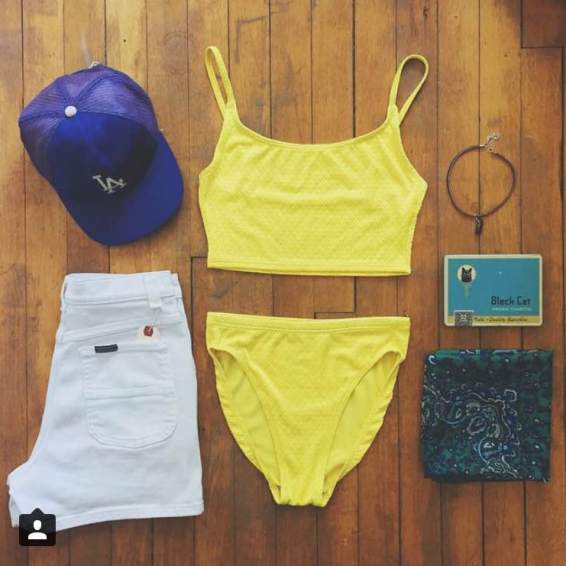 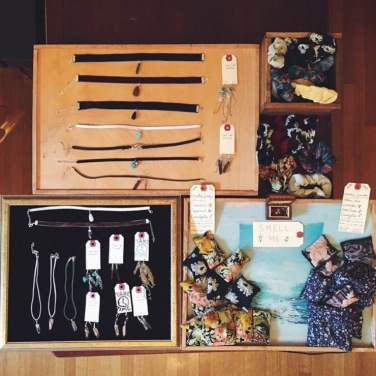 How does Traplin stay above the competition? She alters her clothes and makes them different and contemporary. The OCAD graduate also makes jewelry, specializing in leather chokers. She also looks for brands people want – like Levis – and sizes that will fit people of all shapes.

“I took a sustainable fashion course at OCAD and through Take Time Vintage, I want people to think about where their clothing is coming from. I want them to consider what they’re exchanging money for. I truly believe that by making sustainable clothing choices, we can really make a positive change to the fashion industry.”

Though shorteralls seem to be Traplin’s most popular item these days, she doesn’t spend eight hours Monday to Friday altering these best sellers. Often, a day in Traplin’s life entails picking at the aforementioned secret warehouses, spending hours at the sewing machine (altering the clothes she’s found), applying to different markets, shops and festivals around the city and filling out a lot of paperwork.

Traplin said she tries not to think of paying herself. As Take Time Vintage is relatively new, she is focused on investing time. “Some weeks, I spend 40 hours getting things done, other weeks, it’s a lot less.”

I asked Traplin what she does to keep motivated when it’s slow. She said she paints, draws, reads and watches films.

“My biggest motivator, though, is my mom,” Traplin said. “She is a lawyer. Still, she always makes time to help me. She’s always at my events and everything she shows me – every bit of advice she has to offer – is so valuable. She’s my number one fan!”

Living in her Parkdale home, Traplin used to keep all her merchandise in her bedroom. Now, with the help of understanding roommates, Traplin uses the house’s basement as the place to sort, fix and store items.

Soon, though, this Guelph native hopes she won’t need to keep her stock in the same place she sleeps. Traplin hopes to move back to Guelph with her family and eventually open a store she can call her own.

“My ambitious goal is to open a store in September 2015,” Traplin said. “I have a promising location in mind that I’ll reveal when the deal goes through!”

With a lot of work done and much more to go, Traplin said the best part of her new venture as CEO is, “when someone comes in and finds a perfect piece. They feel happy. I want to help make their day. It’s the most rewarding thing.”

For more information about Take Time Vintage, check out the brand’s website here. Check back for more details about Traplin’s dreams of opening a store in Guelph – we’ll have the scoop!