We are finally rounding out the end of the FIFA Women’s World Cup (FIFAWWC). Being a huge fan of the Canadian Women’s National Team (CanWNT), I have been following this entire tournament from day one.

The FIFAWWC has been taking place all over Canada this June, ending on July 5. Starting with 24 teams from across the world, this weekend, we will see the last two matches of this tournament. Playing Saturday to determine who gets third place are Germany and England. The main event on Sunday is the final match between the United States of America and Japan. As both the USA and Japan are continuing, as expected, into the final round, Sunday’s game will be nothing short of exciting.  In 2011, Japan and the USA made it to the finals, as well. Japan won in penalty shots.

I was lucky enough to see five matches live at the Montreal Olympic Stadium including Canada vs. Netherlands and semi-final game between Germany and the USA .

As Canada is such a multicultural country, there has been continuous support for all the teams in this tournament. At each match, there were tens of thousands of fans from both Canada and around the world, cheering for their favourite teams. Columbia, Brazil, Costa Rica and the USA had the biggest fan bases I have ever seen and heard. From chants, to clapping and of course, the wave, I definitely could not have had the same experience if I was watching on TV at home.

Being on home “turf,” Canada has been eating up the FIFAWWC. Since the big coaching change in 2011 – when John Herdman took over – Team Canada has changed drastically. Their technique, skill, passion and connection has given Canada exactly what great soccer is. The CanWNT has been preparing for this tournament since the last Summer Olympics in 2012, where they won a bronze medal. Ever since this huge accomplishment, the CanWNT has received unconditioned love and support from the entire country. Bringing that momentum to this year’s World Cup, Canada was already extremely proud of our women’s team.

Despite comments from the peanut gallery (and major news outlets) about this tournament being boring, there have been blowout games of 10-0 from both Germany and Switzerland and surprising results like Australia beating out Brazil in the knockout rounds.

One article in the Globe and Mail didn’t sit with me well, especially as I read this statement:

“This is the one thing the women’s game might adopt from the men’s – a conscious embrace of the dramatic gesture. If you’re up, make a show of it. It you go down, go down clawing. When it goes wrong, let it go really, really wrong. And then, occasionally, let it go Luis Suarez wrong.”

I disagree. What I respect most in the women’s tournament is the players’ professionalism and ability to let go. They don’t need to hide behind theatrics and dramatic gestures. If a game or incident does not cause them incredible pain, they get up and play. I’d rather watch that than a dramatic skit put together in the attempts of getting good network ratings (that’s not to say men don’t play great soccer or are not as thrilling as women’s teams). 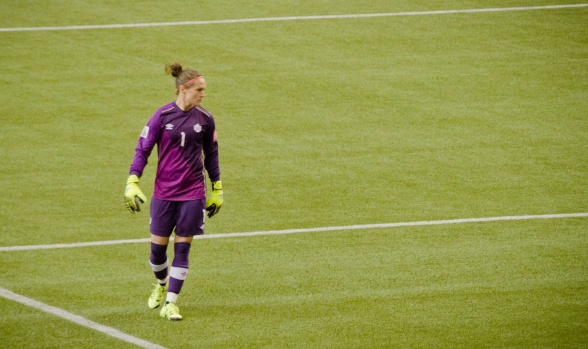 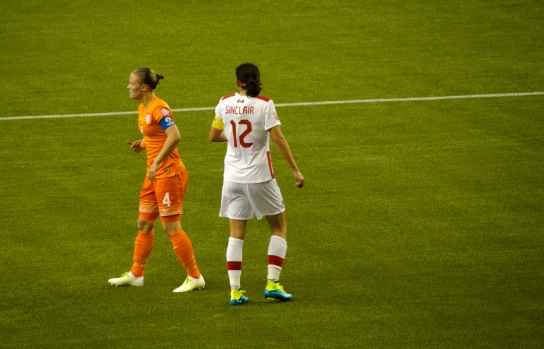 Although their dreams were cut short in the quarter finals against England, Team Canada played an excellent tournament and fans could not be more proud. Winning and losing are both always a result of team effort. If one defender misses the ball, there should be more right behind her trying to stop it. Many are giving Lauren Sesselmann a hard time because she tripped and missed the ball, giving England their first of two goals that match. However, if you look carefully at the footage of the quarter final game, both Allysha Chapman and Kadeisha Buchanan also missed the ball before Erin McLeod missed the save. The blame is not on any one person, but just bad luck and the wrong timing.

Half the CanWNT mixed in with the Netherlands for a corner kick.

With the official announced retirement of Karina LeBlanc and Candace Chapman, this tournament let some young Canadian players shine. With high hopes for centre-back Kadeisha Buchanan, – who played with an injury – she did not disappoint. Her aggressive (but classy) talent was evident from game one.

Although my favourite players are Desiree Scott, a firecracker and destroyer of a midfielder, and Erin McLeod, our fearless goalkeeper, this tournament shared the spotlight with lesser known players. Allysha Chapman, full-back, played one of the best tournaments I have seen. Her constant attacks on opposing teams made her one of my favourites to watch. Midfielder Ashley Lawrence – who scored the only goal for Canada against the Netherlands – is an incredible addition to the team. Lastly, Adriana Leon, an incredibly fast forward, will keep Team Canada going in games to come. Her unbelievable speed and footwork is an asset for the team.

I look forward to watching some of our young players at the Pan Am Games starting July 7 and the entire team back together for the 2016 Olympics in Rio!

What have been your favourite moments throughout FIFAWWC?

Hello everyone. My name is Meaghan DeClerq and I am a freelance photographer. When I held my first camera I had an epiphany – I knew that photography would become a larger part of my life. I graduated in 2013 from the Media Studies program, emphasizing in Image Arts, at the University of Guelph-Humber. Although I am not as talented as the other contributors when it comes to writing, I hope I can showcase my love of photography. Those who know me know how much I adore food photography. No matter what food is on the table, I have to photograph it. It is important to note that when I say photograph, I mean moving plates around until I got the right lighting – leading to many cold dinners and angry family members. Outside of my passion for food, I enjoy many styles of photography, particularly portraiture and commercial. Regardless of the style, what I love most is the creative freedom. Whether it’s being your own food stylist, picking a wardrobe or location, photography lets your work shine. I hope you view my work as what it is meant to be – creative freedom. Allowing the colours and textures to take you somewhere special and different from everyday imagery. View all posts by Meaghan DeClerq