My brain starts to think a lot. Not about the cool things I’ve done in the past year or the great people I’ve met, but about the busy day I’ve ahead at work, the fact that my partner’s on the other side of the country, that I’m going to eat way too many carbohydrates over the next few days and probably not care to stop any time soon, especially since Thanksgiving is around the corner, that I’m still behind on Glee and can’t really bring myself to accept that Cory Monteith died after mixing alcohol and heroin, that my mom was married at my age and I’m still sleeping in a twin-sized bed and that I have to wake up really early the next morning and should probably stop thinking so much, which then leads to a panic attack about how little sleep I’m about to have.

Then, on my actual birthday, I don’t want anyone besides the people who already know to acknowledge my date of birth. Not because I don’t like birthdays, but because my face gets all flushed and I get embarrassed or feel really bad when someone says, “Why didn’t you tell me? I had no idea.”

Birthdays are also full of expectations, which is why I’ve stopped doing anything big. A nice dinner and drinks with those who matter, coffee and cake with family and a Skype date with my partner out west is everything I really want. I also really look forward to reading cards, whether or not a present or a wad of cash is waiting for me after I finish the notes within. My only flaw when reading cards: I subconsciously check for grammar errors and try to figure out what any scribbles had once said. I know, I should stop that.

As a plus, though, I display all the cards out on my dresser for a few weeks before putting them in my card box (you might have something similar – a shoe box stuffed with notes, cards, letters and all other remnants of birthdays and Christmases passed). I’ll flip through them every so often and take a free trip back to elementary, high school or university, giggling at something I forgot happened or wincing as I remember something I’m still trying to repress (which is probably about some guy I liked and made a fool of myself while in front of him, hourly).

This year, despite my inadequate sleep prior to, I vowed to make my birthday celebrations as carefree and enjoyable as possible. No drama.

I spent my birthday night at a work event at a consignment store in Toronto called The Kind Exchange. The store, located near Queen and Peter Sts., hosted the Canadian Cancer Society’s Breast Cancer Awareness launch party. Some proceeds from sales would benefit the Society, guests could get a manicure by donation and there was wine and cupcakes.

ManiCURES is a new campaign by the Canadian Cancer Society encouraging everyone to get their nails painted pink to end breast cancer. For more information, visit cancer.ca/ManiCURES! You could raise money to have a male boss, coworker or teacher paint his nails pink, you could go to a participating salon to help support the cause and/or you could also have a mobile salon come to your workplace! 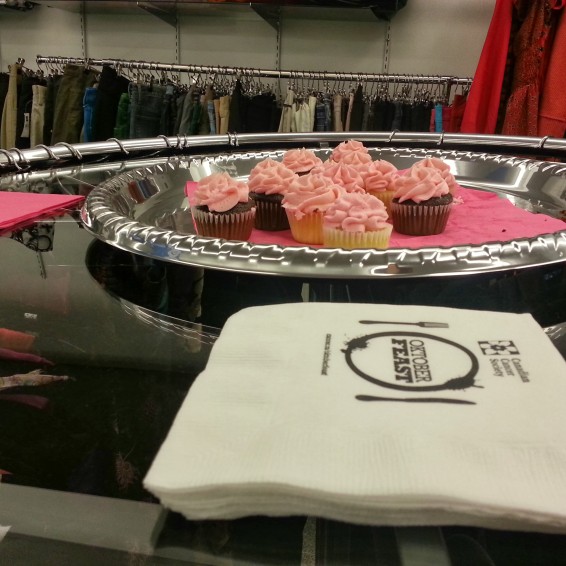 Cupcakes are never a bad idea. They’re pink, like your nails will be this Breast Cancer Awareness Month!

These shoes were some of the items for sale at the Kind Exchange on Thursday, October 3.

Manicures by donation at the Kind Exchange on Thursday, October 3 to help spread breast cancer awareness and find an end to breast cancer.

Before the launch party, my mom and I met for dinner, where we both tried Khao San Road for the first time, a Thai restaurant at Peter and Adelaide Sts. in Toronto that coworkers and friends have raved about, and for good reason. The Gaeng Massaman (curry with tamarind, cooked with onions, peanuts, potatoes and bay leaves with crsipy fried shallots) I had was to die for. Mmm. Just thinking about it is making my stomach growl.

When I got home from the launch, I was welcomed with a bouquet of sunflowers (my favourite type of flower) by two of my best friends. Do they know how to make a girl blush and feel very blessed! Then, I Skyped with my partner and opened his gift. I got an enormous supply of Vanilla Oolong Tea by David’s Tea (my absolute favourite), some well-needed hand and face cream from The Body Shop and the absolute best part: I’m going to see Justin Timberlake bring Sexy Back, again, on February 13 at the Air Canada Centre.

On Friday, family came over and showered me with sweet birthday wishes, cards, hugs and desserts. We ended the night with the most delicious cake from Ginger’s Cupcakes & Desserts, this nifty and heavenly smelling bakery in Richmond Hill, Ontario! 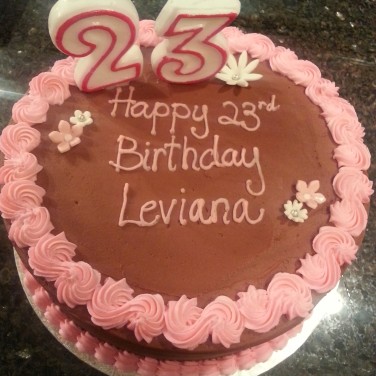 The chocolate and banana cake from Ginger’s Cupcakes & Desserts. 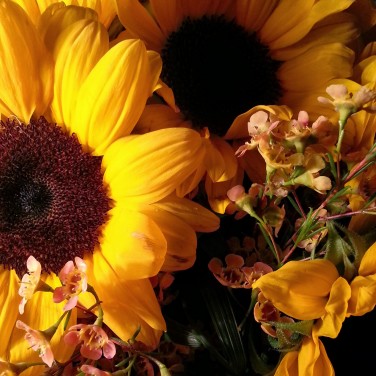 Sunflowers are my best friends! For real, though!

On Saturday, I went to yoga and then treated myself to a new birthday dress and some outfits for work. Thank you H&M for being somewhat affordable. In the evening, I met a few friends for dinner at Mykonos Mediterranean Grill at Yonge St and Davenport Rd. I ordered chicken souvlaki with potatoes, rice, steamed vegetables and a Greek salad. The food was unbelievably tasty and the portion was enormous. As an Italian girl, I can eat. Normally, I can eat everything on my plate. Last night, though, I couldn’t make it through. I wish I did, though. The food was just too good!

Then, I met up with some of the greatest people on earth at Vivoli Restaurant at College and Grace Sts. in Toronto’s Little Italy. We had sangria, the best of chats, the hardest of laughs and talked until the early morning. Vivoli has two heated patios and a third on the rooftop. We were lucky enough to enjoy this October’s milder weather sitting under an umbrella, munching on margherita pizza and sipping drinks on one of the busiest nights in Toronto.

How do you celebrate your birthday?