On Saturday, Kim Kardashian and Kanye West welcomed their baby, whose name is said to start with a K. One day before Father’s Day, while Yeezy was reportedly alongside his baby mama, I was enjoying an evening with my two favourite father figures: My very own Dad and my Nonno (grandfather).

My Nonno preparing for our Father’s Day dinner on Saturday night – cleaning lobster tails before they went on the BBQ.

An old photo of my dad cooking BBQ at his in-laws’ house, gnawing on a steak. Keepin’ it classy!

The theme for our celebration was none other than food. We had delicious lamb chops on the BBQ seasoned with just a bit of homemade red wine, salt and pepper. Then we had lobster tails on the BBQ, my Mom’s infamous lo-mein noodles, green salad with fresh arugula from my Nonno’s garden and delicious fresh panini from St. Phillip’s Bakery.

The lamb we cooked on the BBQ. I submitted this photo for my Gastropost Food Mission, this week, too! 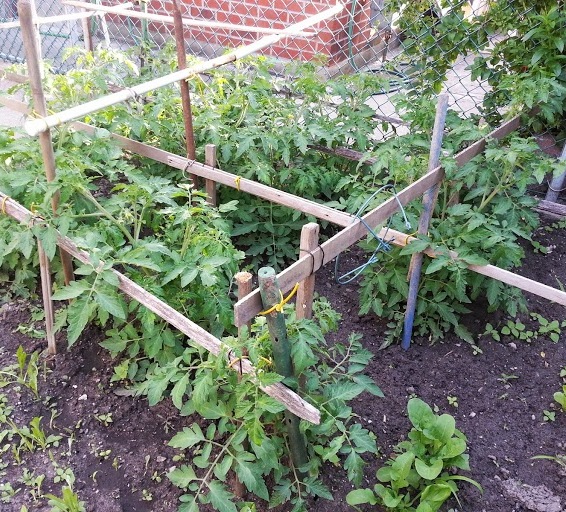 A photo of my Nonno’s garden, where the arugula from our salad came from.

My Nonno shared stories of his life back in Italy, before he moved to Canada. His favourite story to share is of his own grandfather, who at one time had six girlfriends! He had bought them all the same scarves, which naturally did not end up being a good idea. My great-great-grandfather was caught when all his lady friends wore the same scarf to a picnic. While talking about their beautiful scarves, one girlfriend asked the others where they had gotten the accessory. They replied, “My boyfriend.” Soon, the ladies realized they all had the same boyfriend. This very popular man was then chased around the picnic by his six girlfriends, who no longer wanted any of his time.

My Dad talked about once having to hitch-hike because we ran out of gas when going to visit my cousins in Port Dover, Ontario. I don’t remember this happening, because I was very young, but apparently my Dad, Mom, brother, Nonna, Nonno and I were taking my Nonno’s car on our mini-road trip. My Dad was driving and had made a comment about how great my Nonno’s car was on gas. “Wow,” he had said. “This car doesn’t use any gas!” Shortly after, the car stalled. When my Nonno checked the gas tank he looked at my Dad and said, “It’s dry.” Locking the car doors behind him, my Dad stuck out his thumb and started walking, until finally someone picked him up. (My first thought as I heard this on Saturday was, “You are so lucky you are not Tim Bosma. May he Rest In Peace”). When my Dad asked the drivers why they stopped to get him, they said, “You didn’t look like you would hurt anyone.” Oh, how times have changed. The drivers dropped my Dad the hitchhiker off at my cousins’ house, where my Uncle then took him to a nearby gas station. We arrived in one piece, safe and sound and probably famished. Well, I say that, but I know my Nonna probably made a sandwich for us all to snack on before we left that morning.

I also spent a lot of time outside this weekend. At my Nonna’s, I found the cutest set-up of her plants in the backyard. Every time she has a fruit, she will save the seeds and plant them. She has an orange tree and a mango tree in the process of growing. We’ll have to see if Toronto’s weather can allow these plants to actually produce any fruit…

On Sunday, we would have normally gone to a family picnic up in King City at Mary Lake. Twice a year, each year, my family celebrates the two patron saints of Villavallelonga, the town where my Dad’s parents, Aunts, Uncles and even some cousins grew up. Unfortunately, my Great-Aunt is in the hospital. Out of respect, we refrained from going to the picnic and focused on sending her good vibes. I hope you can do the same, too.

We had a nice lunch outside, snacked on fresh figs and had a delicious dinner before calling it a day. My Dad’s Mom, my Grandmother, was there to enjoy the day, too.

What did you do for Father’s Day?