On March 12, I had the opportunity to see one of my all time favourite singing groups: Pentatonix. Having formed in 2011 and showcased their talents in the reality A Capella competition, “The Sing Off,” Pentatonix – otherwise known as PTX – won and started their journey as artists. After climbing through the YouTube world, they became the most successful and popular A Capella group in the world. Between releasing five albums and touring, they also just landed their first Grammy! In 2015, they won for Best A Capella Arrangement for Daft Punk Medley. 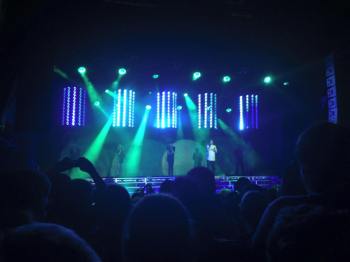 I was able to see my idols up close during their On My Way Home Tour Toronto show. The music, harmonies, set list, lights, performances and interactions with the audience blew me away. A Capella music has always been a big part of my life, so to see five 20-somethings starting from ground zero, now living their dreams, was exceptional for me. From performing covers of Top 40 hits to creating their own original songs, this group has what it takes to be a huge sensation (and they already, kind of, are).

It was really hard to pick my one favourite song by Pentatonix for this Music Monday. In my opinion, their entire PTX Volume III album is incredible. In correlation to their On My Way Home Tour, though, I choose “On My Way Home,” which is an original.

We hope you enjoyed the first ever Music Monday! Out of all the concerts you’ve ever been to, which one still remains a favourite?

Hello everyone. My name is Meaghan DeClerq and I am a freelance photographer. When I held my first camera I had an epiphany – I knew that photography would become a larger part of my life. I graduated in 2013 from the Media Studies program, emphasizing in Image Arts, at the University of Guelph-Humber. Although I am not as talented as the other contributors when it comes to writing, I hope I can showcase my love of photography. Those who know me know how much I adore food photography. No matter what food is on the table, I have to photograph it. It is important to note that when I say photograph, I mean moving plates around until I got the right lighting – leading to many cold dinners and angry family members. Outside of my passion for food, I enjoy many styles of photography, particularly portraiture and commercial. Regardless of the style, what I love most is the creative freedom. Whether it’s being your own food stylist, picking a wardrobe or location, photography lets your work shine. I hope you view my work as what it is meant to be – creative freedom. Allowing the colours and textures to take you somewhere special and different from everyday imagery. View all posts by Meaghan DeClerq