I am obsessed with spelling and grammar errors. I read something and the first thing I will notice is a missing comma or the misuse of a word. I have increasingly noticed people are favouring the word, “women” over “woman,” even when referring to only one female. I have started to see a lot of extra spaces after commas. And, even though majority of us took a lesson on the differences between, “there,” “their” and “they’re,” they are still used incorrectly. When I see said mistakes, I actually want to scream. Do I make my own spelling and grammar mistakes? O’course! Can I stop picking at ones I come across? No! Never! It would be like asking me to stop picking at a plate of thick cut fries with the potato skin still on – it is not happening.

Today, I walked from work in Toronto’s Fashion District to a Starbucks about 20-minutes away. On my route, I walked by the King St and Blue Jays Way intersection. There I was, just frolicking along, mesmerized by how cute the above street sign looked, when I saw it. A huge, inconsistent typo on the bus stop shelter on the south-west corner. Despite all the other street signs clearly including an “S” in the word “Jays,” this shelter was only labeled as, “Blue Jay Way” in big, clunky, white letters. If my obsession with consistency were a firework, it would have exploded.

You might be thinking, “Oh, who cares. It is a bus shelter.” But, do you know what goes through my mind when I see things like this? I am curious to know whether anyone even took five minutes to look into what the Toronto street name actually was before okay-ing the final print. Well, clearly we know no one bothered, so the real question is: Why didn’t someone, anyone, proofread? Besides, “Blue Jay Way” is the name of a song written by George Harrison. The street name and the song title are three words long. It does not take that long to cross-reference. What would happen if the street name was something like, “Bolderwood Arboretum Ornamental Drive” or “Northeast Kentucky Industrial Parkway” (both real streets, FYI)?

The point is, whatever you are writing, you need to proofread and then get someone else to look it over. There are people, like myself, who will notice your errors when going about our casual days. The errors will stop us in our tracks and baffle our minds. They will also make anything you say or write less meaningful and credible.

Here are some proofreading tips that will probably save you from turning one of North America’s biggest city’s street names into an inconsistent nightmare of missing S’s: 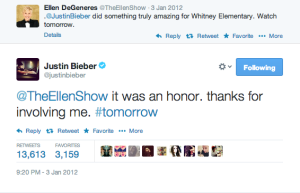 I could go on for ages. I will spare you.

It would be quite awkward if you found a typo in this post, now that I think about it. If there is a grammatical or spelling error that you have found in any of my pieces, please do send me a note so I can fix them immediately. Any unedited writing errors will keep me up.

Are you obsessed with writing rules like I am? Or is it just me?